I Have A Dream……familiar words which have different meanings for many.

For me, that means one thing:  to have an opportunity to work with the best in my industry, not an ego trip mind you, but to be part of a collaboration which is dedicated to being and doing your very best, passionately motivated to providing exceptional service, so that the outcome far exceeds expectations.

Because passion for what you do motivates you to do your very best when striving for perfection.

And on this very day, Day 3, I had an opportunity that I had dreamed about for almost 10 years.  And it happened here:

Charles Jouffre speaking to our group with his assistant Julien Jamme, who spoke wonderful English

The selling point for me to come on this trip was that one of the destinations included a tour of this upholstery/drapery workroom, renowned for its clientele, but most importantly, the workmanship!  As an artisan of couture draperies, this is as good as it gets for me!

I first heard about Charles Jouffre in a trade magazine article.  I remember thinking to myself, wow, this is what I aspire to be…a master in my trade, making beautiful things, one stitch at a time.  I also knew I wanted to tour his workshop, if possible, to see his operation and his approach.  His clientele encompasses the globe….including private apartments and houses, historic monuments such as the Elysees Palace,  the Palais Garnier Opera House and even Louis XVIII’s funeral hearse!  In addition to working with designers such as Philippe Starck, Robert Couturier and Drake/Anderson in NYC, royalty is counted among his clients.

So on this day, May 18, I was fulfilling part of a dream.

This area is in the showroom which displays the tiny models of furniture, sample boards of upholstery methods and not seen in this photo are sample books of fabrics and trims.

This is a miniature chair frame.

This is a presentation box which is used to show clients their projects.  This is a new drapery style with a sample of the header style.  They designed a line of hardware specifically used for these panels in which a photo later on in this post will show a closeup of the top of the panel.

When I saw this photo of the drapery panel it reminded me of a project I had done with Deb Barrett several years ago.  I said something to Julien about having made that style which led to a conversation that I will be relating at the end of this blog post.

The tour then led us through the offices and we arrived at this one in which the custom designed furniture is handled.  We see drawings being made to scale according to drawings received from a designer.  These drawings are used to start the process for 3D printing of scale models.

These are the actual 3D models that come out.  Charles told us that it is much easier to do it this way now instead of building real models from wood as before.  This way, if a designer wants to make a change about a curve in the arm for example, it requires less time than to start fresh with wood and cut, curve, etc.

As we left the offices we made our way into the workshop and along the wall were these vignettes of drapery header styles.  I like this display and thought I could do something  like this in my studio.  Seeing is believing after all and it helps to show exactly how the drapery will look. 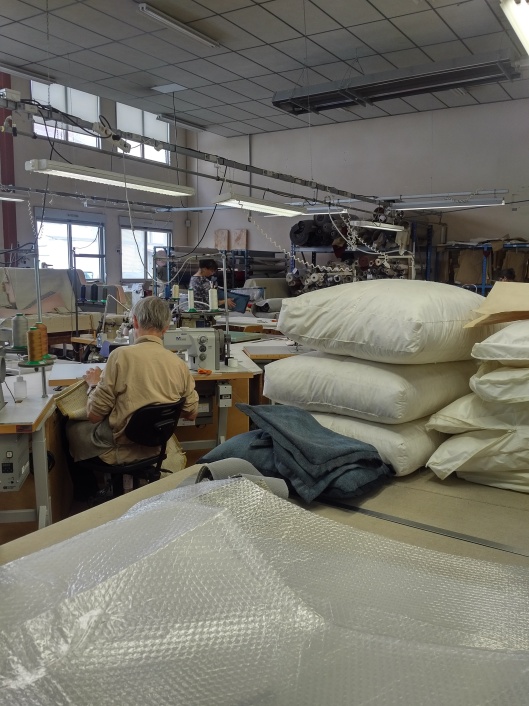 Inside the upholstery workshop we see cushions being made.

This is a piece of furniture in construction.  Note how the pillow pattern matches the chair back pattern perfectly.  As we passed through I saw one of the girls closing this pillow up by hand.  To see it on the chair brought everything together.  We were encouraged to sit in the chair and I sat on a couch that was so comfortable that my feet even touched the floor! 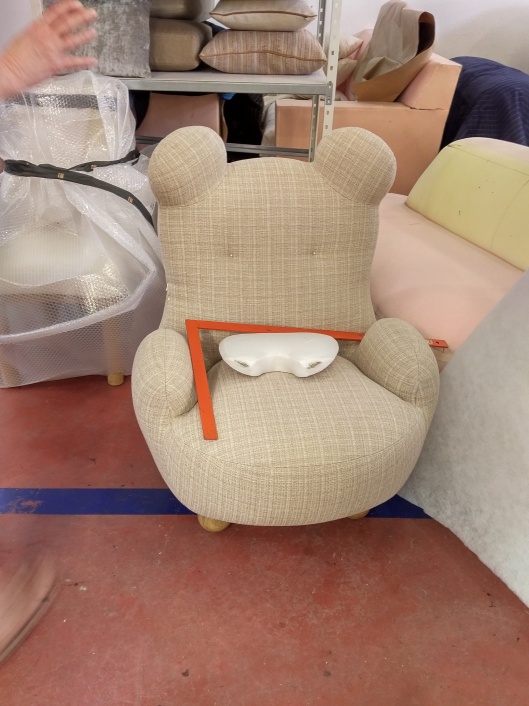 This is a Teddy Bear chair designed by Pierre Yovanovich and made by Jouffre.

We then went through to the shipping area and this room is the installation room.  It holds everything needed for installs and was perfectly organized, nothing thrown in piles like I see in some installer’s vans.  This is a shipping cabinet that will include everything needed to complete an install.

As we wound our way through, this was an area they kept their frames at, showing how the furniture was made for future reference. 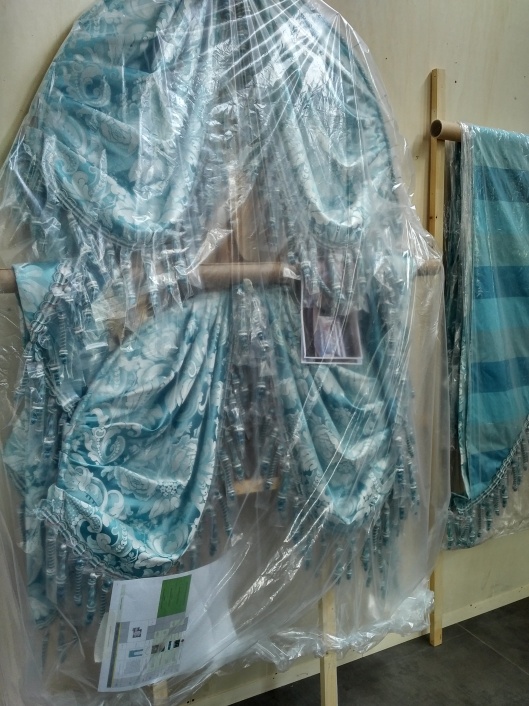 And this!  Draperies wrapped and ready to ship.  We were told that just a few days earlier and that wall was full of finished products but at least we got to see this.  It would be nice to see where it is being installed…maybe a future magazine article will  let us know. 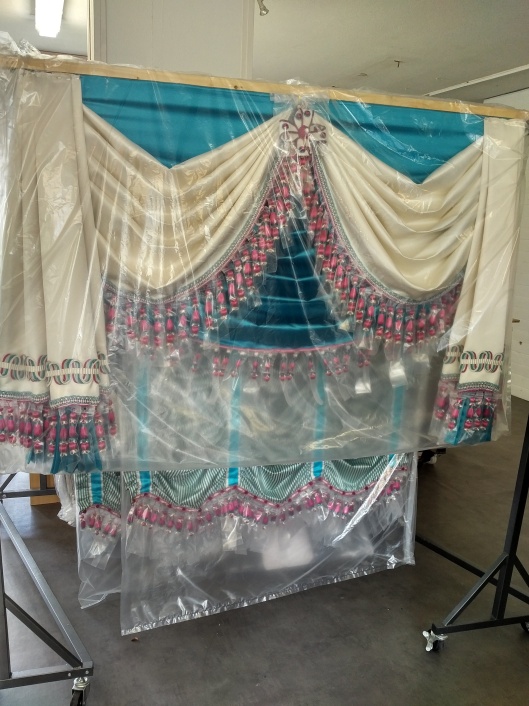 More finished work that if my memory serves me, was 2 years in the making, yes, 2 years!  Client wanted mock ups made first to see where the treatments would come to in the window opening.  I can’t imagine having a 2 year lead time but everything is custom, down to the hand made trimmings. 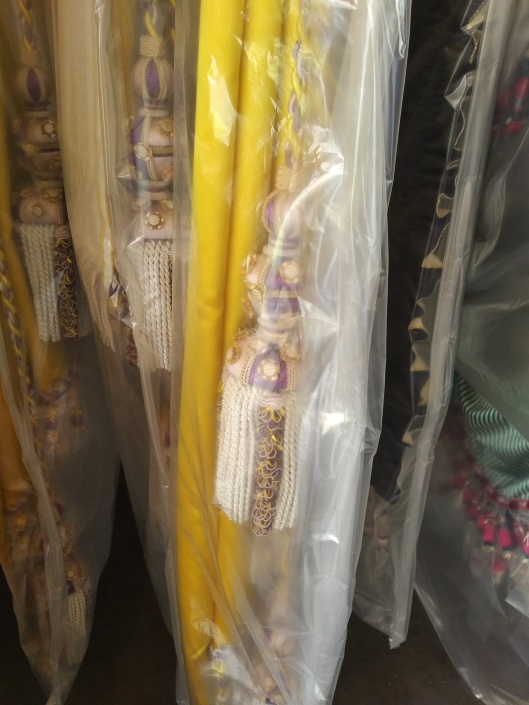 Speaking of trimmings, look at these tassels!

And now to MY favorite room, the drapery workroom.  Look at those tall ceilings!  They are needed for long draperies if you are making them for the Opera House.  They were working on sheer linen panels when we were there.  I had an opportunity to talk to one of the gals there sewing.  I told her I was a seamstress too and her eyes lit up and she started showing me what she was working on.  She had a very tedious job of rolling a tiny hem with that linen, but I told her I appreciated her workmanship and knew what she was doing wasn’t easy.  They have the same Juki machines I do! 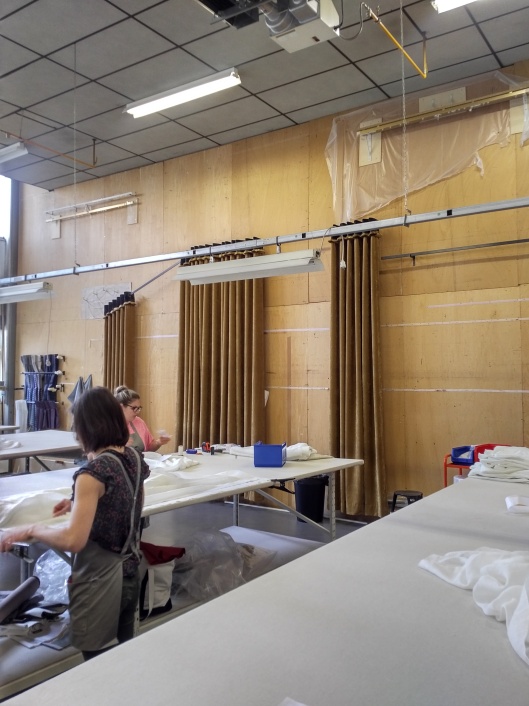 Another angle of the workroom with a wall where they can mount the draperies up on the hardware being used and work on finished lengths and arched treatments.

These are older presentation boxes that were used to show a client the conceptual drawing, an actual hand mockup of the treatment in the fabrics and then a picture of the finished product.  We all loved this idea!

It was back in the workroom on one of the tables that Julien was showing us the sample drapery.  Looking from the top down you can see the special rings they designed that were hand sewn as well as how they brought the pleats together to form another pleat.  A genius idea!  Why didn’t I think of that for my panels in the photo below!

It was at this time that he asked if I had a photo of the drapery panels and sheers that we had discussed earlier and I did!  I’m so glad I had a folder on my Facebook page for all the draperies I did for IWCE vignettes.  He asked for a copy of it and so I agreed to email it to him.   Deb told him she had the sheer panels and he asked permission for us to send it to him so he can see how I made it!

And I’m thinking to myself: is this really happening? He really wants to see MY work?  Can I just pass out now?  Silly girl that I am!  But it gets better… 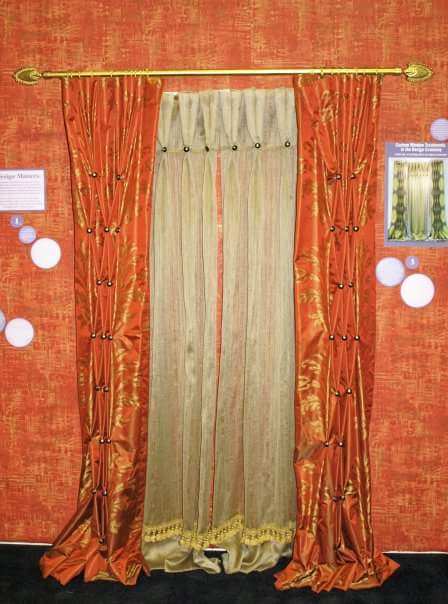 This is the drapery we were discussing and it is one of those moments that you wish you had really dressed those panels out nicely before you took that photo.  Because, one day, the best of the best might want to see what and how you did it!  At trade shows where this was displayed, people are turning your work inside out wondering how you made it, disrespecting  the design and dressing out and if you look closely, someone even ripped a button off the right panel towards the bottom.  And I remember being in a hurry when I took this photo too.

At the end of the tour I had resigned myself to the fact that I had chickened out and lost all nerve to ask Charles if he would be open to my doing an apprenticeship with him.  At that moment of my self doubting, Deb said to me:  so did you ask him?  I said no and Charles looks at me and at that moment I mustered up all the courage I had.

Courage for what you are thinking?  Courage to ask if it’s possible, could I do an apprenticeship with him.  This was all spoken in French mind you, and I told him I was nervous to ask but all of a sudden that French rolled right off my tongue as if of fire and I had no idea where it was coming from and I was really hoping he understood me!  Without hesitation he said yes and asked how long and where would I like to do it?  Here in Lyon or in NYC where he has another workroom?

To say that I was in shock was no exaggeration because I fully expected to hear a ‘no’ but when I didn’t, I felt like I could do backflips!  My dream was just realized, wow, no words could describe how I was feeling but I was walking on air the rest of the day.  I floated out of there wondering, did I just really experience what I think I experienced?

Yes, Tammi, you did!

12 thoughts on “Day 3 Everyday Extraordinary Provence, The Dream, Part One”

How Do I Categorize Thee…..My Dear Posts

Archives of past posts

What Do I Have To Show For My Time? The 3 latest posts.

Top Posts That Get the Most Attention

Books That Get My Attention

Summers In France by Kathryn Ireland

Creating A Home by Kathryn Ireland